In Touch with the World

Download this story as a PDF.
Email Us to buy the book or CD.

If you would like to visit, please stop by or call us to schedule a appointment. 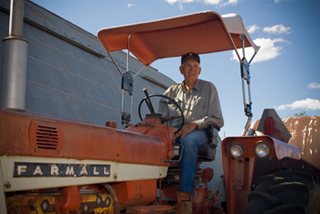 The year was 1920. Babe Ruth was traded by the Boston Red Sox to the New York Yankees for $125,000, the largest sum ever paid for a baseball player; F. Scott Fitzgerald published his first novel, This Side of Paradise; and on Jan. 16 of that year, Prohibition went into effect in the United States with the signing of the 18th Amendment to the Constitution.

But for a small band of dry land pinto bean farmers in rural southwest Colorado, 1920 was significant for another reason. It marked the opening of Farmers Telephone Company and the beginning of long-distance communications – a change that would transform the lives of people living in the dry land farming country near Pleasant View, Colo., one of the most isolated and remote regions of the state. As long-time resident Bessie White says: “It put us in touch with the world.”

Prior to phone service, life was difficult for people in rural America, says Doug Pace, general manager of Farmers Telephone. “Until phone service was established in this region, most residents rode a horse, hitched a ride on a train or a buckboard, or walked many miles to carry news to family and friends. The advent of the phone changed everything,” says Pace. To honor the legacy of the people who founded the telephone company, Farmers Telephone is opening the “Farmers Telephone Museum” near its headquarters in Pleasant View. The museum contains artifacts, equipment and memorabilia that have been collected and donated by the staff, board of directors and local residents. It is housed in the original telephone company office, the building where Farmers first launched the company in 1920.

“The museum, as well as the book and CD, are an effort on behalf of the telephone company to educate the public about life in rural Colorado nearly a century ago,” says Pace. “It’s also our way to pay tribute to the farmers and their families who had the vision to bring telecommunication services to this area.” Today, Farmers Telephone Company provides phone, high-speed Internet and Web-based services to communities throughout the Four Corners.

White, who moved to Montezuma County in 1934, wants her children and grandchildren to know what a sacrifice it was for local farmers to start the company. “These weren’t rich people. They pooled what little money they had to do this and took some big risks,” says White whose father and husband were dry land pinto bean farmers. Her son is a third generation dry land farmer on the original homestead. “I want people to know that the farmers in this part of the state were strong minded and progressive when it came to the telephone.”

“It wasn’t a luxury, it was a necessity,” adds Junior Hollen, Bessie White’s older brother.” Before the phone company, most people had to ride a horse clear to Lewis or Cortez to make a phone call.”

White, Hollen, and other local residents are featured in the hour-long audio CD as well as the book on the telephone company. The opening of the museum was celebrated with an ice cream social on Oct. 4, 2008, at the site of the new Farmers Telephone museum. For more information, call 970-562-4211.

Jan Dixon runs a business consulting practice in the Four Corners called SmartChoices, LLC; she also is a freelance journalist and poet. She can be reached at janincolorado@msn.com

Download this story as a PDF.
Email Us to buy the book or CD.